As it’s the holidays my family has more time to explore everything we see, do and encounter on our way through the time together.

Often that’s through necessity. Sometimes you have to ‘pad out’ the day – kids are used to a school day that constantly stimulates and challenges them physically, intellectually and emotionally.

When we find something we’re interested in I often just Google it. That usually throws up a maze to explore on any particular subject. Yesterday, for work, I read the Vogue website – seriously, it was for work – and took my own twisted turn into the birthday celebrations of Barbie. She’s 60 this year and Vogue has asked six young designers to create a new outfit for her. 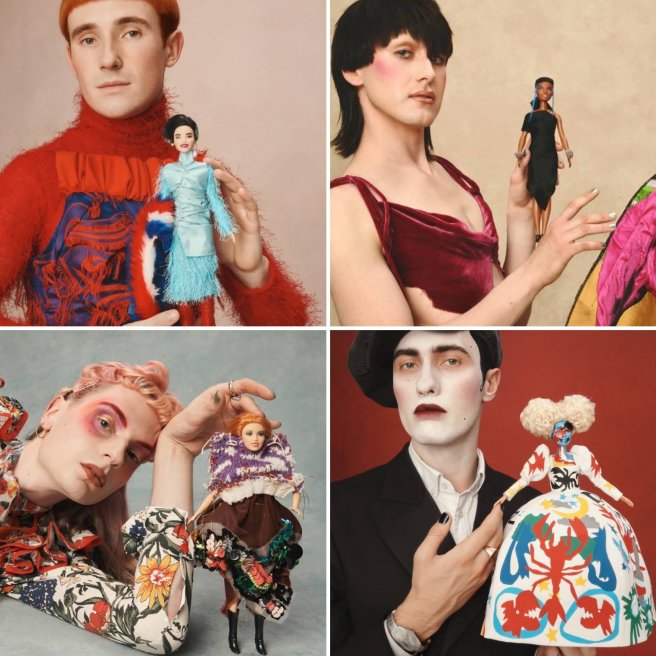 They are very fashion forward, I’m happy to say. I’m happy about that because some things about the iconic doll still seem out of date. Yes, she’s had over 200 careers – but the Barbie most of us instantly recognise is a universal model: tall, blonde, thin, white. In fact she only became widely available in different sizes, shapes and colours in 2016. Before then ‘different’ Barbies were, quite literally, novelty items. In 1975 – the year when I may or may not have been born – Olympic Skier Barbie was all the rage. You can check ‘your Barbie’ by clicking on this link.

Even so, the ‘career Barbies’ are still the standard shape and size. At least now diversity is getting a (small) look in, though. In 2018 Mattel set aside its lack of political conviction and produced an Inspiring Women series that numbered 15 dolls modelled on, well, inspiring women. At that point in her evolution she still hadn’t reconciled herself with anything less than physical perfection, though. Frida Kahlo didn’t come with her unibrow, her waist wasn’t thickened by her surgical corset and her legs were both perfect.

This year, for her 60th birthday, Barbie has launched the ‘biggest celebration of role models’ – introducing 20 women from a total of 18 different countries to little girls everywhere. And most appear to be fairly physically approximate to their human counterparts.

To be honest the company has had to move in this new direction. Girls want to see themselves in their toy for her to be a real best friend. For years she didn’t even have short hair, let alone hair that is remotely like that of many of her owners – in terms of colour, texture or appearance.

As a child I played with Sindy dolls. They were marketed as ‘the fashion doll’ and a large part of their appeal was their appearance. Sindy looked like a woman – but she also looked like a girl.

In the adverts for her furniture she even burnt her dinner, she didn’t have a boyfriend – she lived with her friends – and they all gave the impression of having somewhere important and fun to get to.

My kids are massive Barbie fans but I’ve made a conscious (and probably quite humourless) effort to get them the ‘serious’ Barbie incarnations when I buy her. We have an astronaut (well, quite possibly a cosmonaut – depending on when she started training); a rocket scientist (who is married to astro / cosmo B); a vet; a race car driver (she trained after she came home with us – and when I finally shelled out for a Barbie jeep); a singer (I had to make her a microphone); a hacker (not my idea – she was a robotics engineer, but found her niche after Child 1 watched Ocean’s 8) and various fashionistas. I’ve used stock photos as they’re no longer pristine. 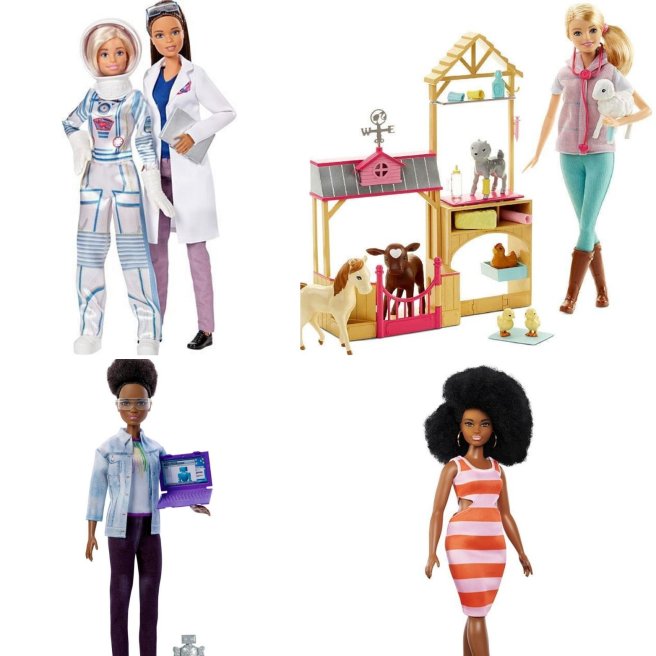 There’s also a classic, Linda Carter era Wonder Woman – thanks to the perennially amazing Auntie Sophie (check out her Miss Scrumptious recipes through the link). WW doesn’t get out much, I’m afraid to admit. We say it’s because she has to conserve her energy for ‘real emergencies’ but it’s also because harm will only come to this tiny – but magnificent – model of my first WW (and TV crush) if it’s prepared to wrench her from my cold, dead hands… after excavating the tomb I will have made around her with my rigor mortis afflicted body…

It’s Child 1’s birthday tomorrow and her sister has ‘bought’ her a firefighter Barbie because she looks exactly like the ‘fire-lady’ who came out to the building when some little scrote set the fire alarm off two months ago. She’s just been wrapped in fact. I didn’t have to encourage her choice at all – although she was conscious of the fact that she impressed the shelf stacking staff in the Asda by us. 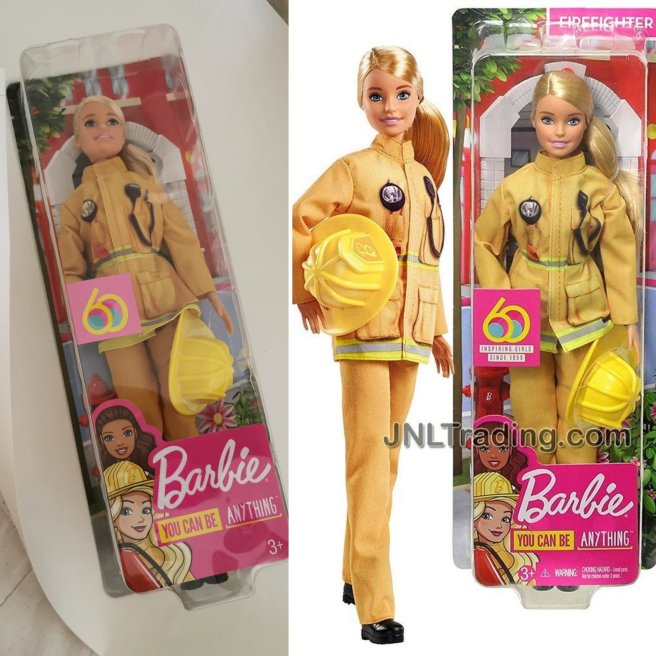 Anyway, the girls were fascinated by the idea of Vogue encouraging people to create new styles for such an enduringly popular doll. We have experimented with making swimsuits using balloons (see photo below). We wanted more!

I don’t think it’s an accident that their favourites were these two. It could be the designs but I have a feeling that it’s in part due to the dolls feeling more attainable and less like an impossible ideal.

That’s the point of any doll. They may be a role model but they also have to be likable. Nobody confides in a Darth Vadar action figure. Well, maybe some kids do… I’d love to know what therapists would make of that actually.

I’ll leave you with a tiny clip of Child 1 doing the Wonder Woman spin – with our very own Wonder Woman. And I say ‘our’ quite deliberately. She’s Barbie and she’s Wonder Woman. What more can you ask for?

Have fun with whatever brings you joy tonight, dear readers. Maybe it’s a Barbie. Probably not – but remembering the rosy moments from childhood is always lovely.