This blog post could just as appropriately be called: When I finally realised that I have either a) too much time on my hands or b) a natural inclination to waste precious time I can’t really afford to spare.

You see, as those of you who follow the Sophie’s Voice Facebook page may have correctly deduced yesterday I have ‘a bit of a thing’ about Chris Evans. In fact, not just about Evans – but about all the iconic Chrises – and some less well known ones. Right down to, for example, CNN anchorman Chris Cuomo and the moody champion of method acting, Christian Bale. No Chris has escaped my scrutiny – to the best of my knowledge, anyway. If not attractive – physically, mentally and/or in terms of personality – they can still be useful as comparisons with the ones who are.

Today I’m going to stick with ‘the big 4’: Evans, Hemsworth, Pine and Pratt. At this point in time they’re the most relevant to my exploration of the real star of this show – Chris Evans. You see they’re the ones who are most similar: all superheroes – well, with the exception of Pine, but he gets an honourable mention due to his willing, unresentful sidekick status and selfless disregard for his own mortality in Wonder Woman; all in the same age bracket; all with the same (approximate) professional range – Pine can do more serious roles, Pratt and Hemsworth can do comedy; all vying for the nearly middle aged male lead roles… You get the picture.

Possibly most relevant today is in terms of pop culture. For example their inclusion – even prominence – in the proliferation of Which Chris quizzes that seem to be ubiquitous at present – so ubiquitous that even my children have tried them. You’ve probably already taken one – I hope you got your favourite. My result was disappointing at best. I took the linked quiz yesterday afternoon with Child 2. She got ‘the smart Chris’ – CNN anchorman Chris Cuomo – while I got ‘the Irish Chris’, Chris O’Dowd. A 5 year old got the smart one…a 5 year old. I despair.

Anyway, yesterday was Chris Evans’ birthday and I was faced with the question ‘On the occasion of Chris Evans’ birthday, opening up the question: Is he the best of the Hollywood Chrises?’. Here, I thought was my chance to shine. My detailed study of the subject would finally prove not just insightful – but illuminating. My knowledge could benefit others. It turned out that I’m not the only ‘expert’ in the field. My fellow blogger Zinnat Ali is a self confessed ‘expert’ on Evans and has produced a definitive list ranking his films. The entire discussion gave me a valuable opportunity to catch up with my studies and now I can pass this more academic level of knowledge to you all.

Firstly, Chris Pratt is cancelled. His involvement with the almost cult-like Zoe church has revealed a tone deaf attitude to LGBGT+ issues and given ‘gay cures‘ a tacit approval that they should never have. Also, on a really shallow note, his Facebook announcement about his recent wedding was a horribly gauche advertorial for Giorgio Armani. It’s naff and I felt faintly embarrassed reading it – like you do when someone you were friends with in high school asks you if you want to buy their MLM products.

I used to be a big fan of Pratt. I could forgive him his banging on about Jesus because I have friends who are religious and who aren’t homophobic or unable to discern the error of a church’s views and positions on certain issues. I love all members of my – carefully curated – circle of friends and respect their respective faiths. It seems like Pratt isn’t modeled after them, though. I know they’re disappointed by his behaviour. If properly religious people are, I am too. Although I would be anyway.

It’s time to hurriedly (and gladly) move on to my ‘afterthought Chris’. Better known as Chris Pine. I’m not that excited by his looks – while not repellent – but he’s smart and funny and those traits sell to me. He studied English at Berkeley. That actually intimidates me – he’s almost certainly smarter than I am and probably loves poetry. He’s quoted as saying “I tried philosophy, but it was too restrictive.”. Crap. 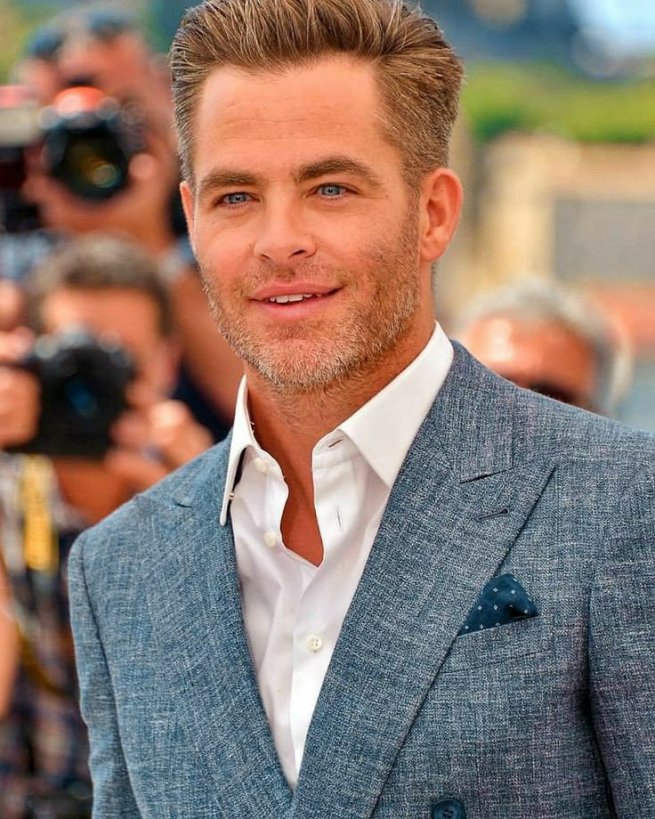 However his penchant for getting shitfaced in public and not caring what anyone thinks (to the point where the paps no longer bother taking photos because it’s not novel) is winning to me. That puts him clearly into the ‘partner in crime’ bracket. And he can scrub up nicely and do it at posh places too. I personally love getting shitfaced in posh places and laughing at pompous windbags. It’s fun. And I suspect he understands sarcasm too. He’s reasonably talented – although he doesn’t really do comedy. Plus point – he appeared in The Princess Diaries 2: Royal Engagement without stealing the limelight from Anne Hathaway or Julie Andrews. That film is all about rites of passage of a young woman (albeit an amazingly privileged one) and the female role model who leads by example. The male love interest is just a stage in the star’s character development. It’s rather inaccurately titled, actually.

Pine has also spoken publicly about his political views – which are “left-leaning liberal” but is extremely objective about the actions of any government (he strongly criticised President Obama’s approval of drone strategies). He’s also been an ally of the LGBTQ+ community for a long time. I can get on with that.

One thing I don’t like about him is his past history as a serial super model dater. His track record isn’t that of Leonardo DiCaprio and he’s at least always dated people his own age but it’s enough to make me feel slightly insecure. Yes, I’m body positive – but I’m also human.

That nicely segues into Hemsworth. Here I have to declare a bias – I don’t go for blondes. Ever. I don’t know why – I just don’t. For all of you, though, I have tried to be as objective as possible. If you are acquainted with the Marvel universe you will know what I mean when I quote Rocket – the smartest, most destructive and insecure raccoon in the universe – and say that ‘he looks like an angel had a baby with a pirate’. And that’s after a really bad period in his life – while wearing a pretty crappy eye patch. Physically he’s almost perfection – and he actually enjoys keeping himself that way.. So much so that he’s started an app designed to provide ‘an holistic approach to fitness, nutrition and mindfulness’. It’s not supposed to be for gym bunnies and people who bore on about their diets but I can’t help thinking that Hemsworth being the owner and heavily featured as the physical representation of what can be achieved means that it won’t be appealingly accessible to most humans. 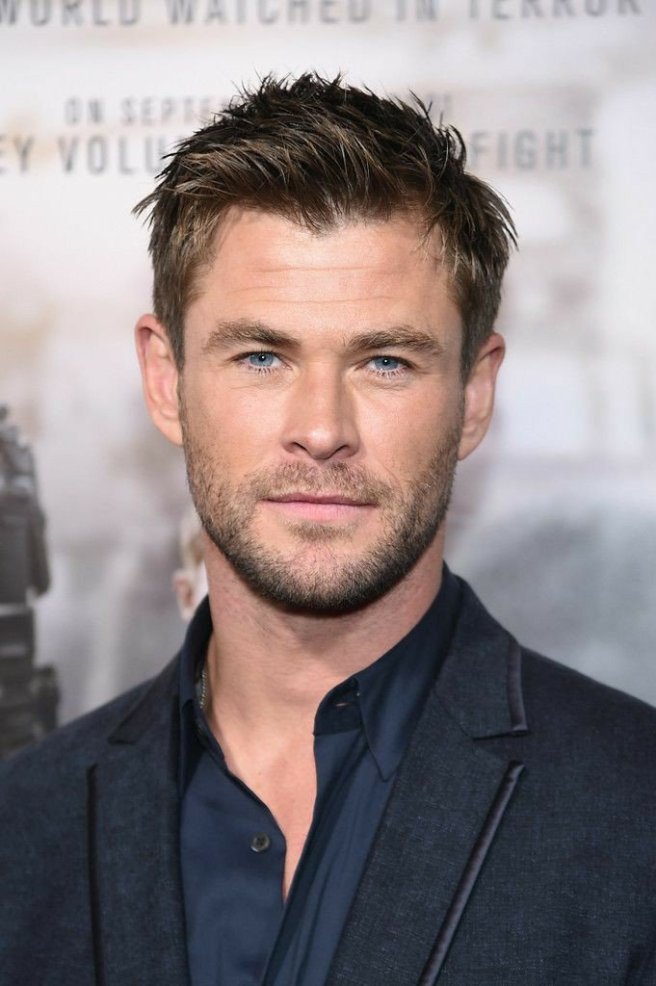 I always say that I’d never date the Brad Pitts of this world because there would come a day when I would get out of bed after sex, see myself in the mirror and say “shit, maybe I should give the chocolate a miss for a while.”. Except that a Brad Pitt / Hemsworth type would just look at me blankly – like ‘does not compute’ (because they have never experienced this sentiment) – where a less perfect specimen (Evans, Pine or, reluctantly, Pratt – who seem to gym it specifically for a role) would go “babe, you look amazing – give it a miss if it makes you happy but don’t do it on my account. Do you want to finish those Mars bars in the fridge before you go on your health kick?”.
Of course I would immediately think ‘oh f*ck it – yes’ and sack off the entire potentially disastrous plan.

Hemsworth doesn’t really talk about politics – although he does publicly support his son’s choice of nail polish. I can get behind parenting that isn’t gender biased. Plus one of his kids is crap at sports and he leaves it be – instead of trying to fit a round peg into a square hole like so many sporty parents.

Lastly I admit to absolutely loving his film Rush. It’s no work of art but it’s fun.

And that leaves Evans. I have spent many many many hours ruminating on the Chrises. I regret none of them. These hours have often involved lengthy imaginary scenarios involving one or other of them. Or even one, two, three or four of them together. I’ll let you speculate wildly about the contents of these fantasies – you’ll enjoy it, trust me. However I can tell you that I consider Evans to be the Mary Poppins – ‘practically perfect in every way’ – of Chrises. Except good in bed… 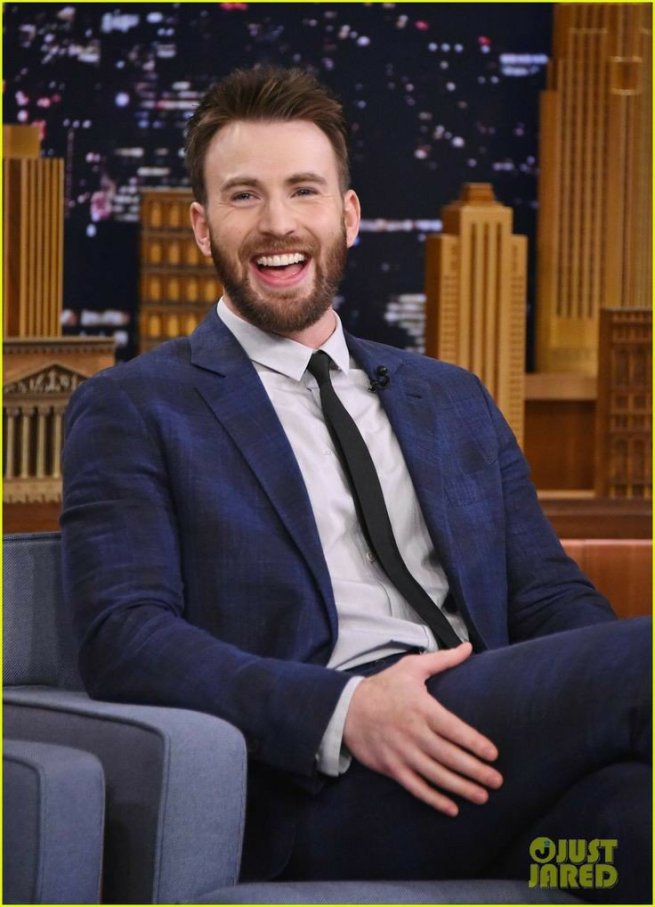 Interestingly, however, I have never fantasised about him in that latter respect. Instead my mind has led me to (and these are just a few examples) the following:

He helps me when the train on my dress gets stuck in a chair. This is an exact replay of the Regina King incident – I read almost all the fashion magazine blogs that day – but it helped me decide who to take as my plus one when I go to events. Or get a dress with a train.

Next (and probably my favourite) is a highly niche scenario – in which I get my flat and, more excitingly, my bathroom to myself for an afternoon because he takes the kids to the park with his dog for the afternoon. I mentioned this a friend and was greeted with this response: ‘In my fantasy he wouldn’t mind inheriting my kids and would always encourage them to follow their respective journeys, chase their dreams and live their best lives – without resorting to those clichés.’.

This quote really sums up what women seem to expect from Evans the most: ‘Also I bet he’s an early bird who would leave me in bed and go to the bakery to buy croissants, then make coffee in the morning. Both of which would be the exact right temperature for me to consume when I finally get out of bed.

My next argument is weak but I like it. He’s *whispers* Captain America. He does the job with or without a beard, he fights Nazis and he’s loyal to his girlfriend – no matter what their age gap is.

After all that gushing there is a catch – his plans for a new website that he hopes will give ‘both sides of the political issues of the day. It’s a noble concept but he could just set up a scholarship for young, aspiring journalists – instead of giving gasbag professional politicians a chance to grandstand. We’ll all have to wait and see on this one.

In short, I’m generally Team Evans (when I’m being sensible) – with a soft spot for the idea of an occasional ‘what kids, I don’t have kids – well I do, but i have a really good babysitter so I’m not worried tonight’ blowout with Pine about once a year. I suspect that once a year would be quite adequate for someone aged 44 who never leaves the house.

What do you think?

Note: I can take no credit for any of the quotes in blue – quite obviously from a previously private messenger conversation. I’m quite obviously not capable of such accurate brevity!

2 thoughts on “Which Chris?”