Okay, I have a confession – I’m sure it will shock the hell out of you all but I am comfortable with nudity. “No! Seriously? That comes as a massive surprise”, I hear you all say.
Really, honestly – I am.
I get how an individual can be uncomfortable with their own body – that’s not to say that I think that anyone should feel like that. I want everyone to be happy with themselves. In fact, I just want everyone to be happy, full stop.
I hate self hatred – it’s so self destructive and toxic and making an issue of nudity just makes it feel shameful. It isn’t. Everyone has a body. They’re all different and they’re all appealing in their own way.
I understand the censorship of porn on social media like Facebook and Instagram. Fine – whether it’s allowed or not, children use these sites. As a parent, I have no problem describing gay marriage to my toddler but I’m – quite frankly – far too lazy to cope with the mental gymnastics that would be involved in explaining (very hard) working genitalia.
However, I have absolutely no idea why anyone would want to censor images of the human body in its simplest, purest form.
What is worse, the digital behemoths censor pictures of things that anyone might happen upon every single day…that woman nursing her baby at the next table? Censored. The carefree student sunbathing topless? Censored. My (male) friend, waist up, in the bath drinking champagne? Censored.
All joyful images….all censored. It’s not just that I hate the censorship – organisations react to their consumers. It’s true to say that very few have the balls to innovate when it comes to the court of public opinion, at all.
What I detest is that the public complains at all. Why? What is so disgusting about nudity? Go to any beach in Europe. There’s a lot of it about – and some of those people have to pick stuff up. By bending over. Imagine what you might see. Jesus. Football with the kids? That’s a lot of dangling.
Well, guess what? Get. The. Hell. Over. It. You’re making your kids think that their bodies are something to cover up.
You want them to contort their bodies as they change their clothes under towels? Done. Always have sex with the lights off? Good job. Never see the beauty in another person’s body. Snaps to you.
You’re a real achiever in the Freudian stakes. And, quite possibly, rearing a serial killer. Nice work.
Here at Sophie’s Voice, we are pro-loving ourselves (you deserve it – life is hard enough without hating yourself, for God’s sake), we’re pro-self love (to be perfectly honest, I use the time to think about Mark Ruffalo in a verrry focused way), we’re pro-body positivity (you’re all lovely – trust me), we’re pro-sex (it’s fun and good cardio) and we’re pro-nudity (if that’s what you want to do, and it’s warm enough).
What we do not approve of is censorship, smallmindedness and criticism.
This is a friendly place – be nice or leave.
And I will post as many pictures of tits as I bloody well want. These, I think, are a worthy start. Facebook is trying very hard to get rid of images of post-mastectomy bodies. This example shows surgery scars that have been covered by tattoos. No nipples – Facebook’s great bugbear – but no good either, apparently.
Let me assure you, right now, that my eyebrows are at their highest levels and my eyes are rolling. 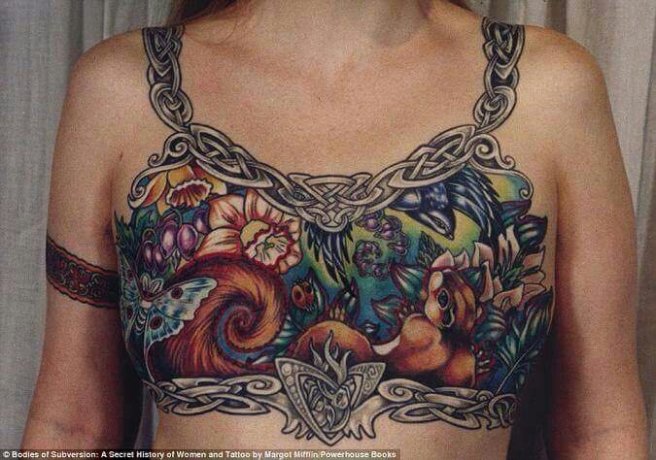